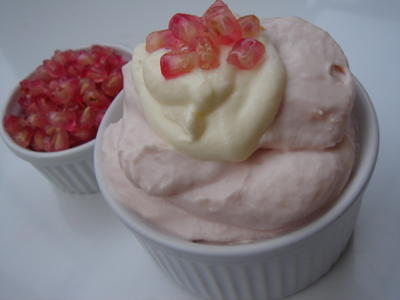 I blog in Hungarian but I decided to participate in some of the international food blogging events and do those posts in English in order to be able to interact sometimes with the international food blogosphere. So far I participated only ones but was that fun! I discovered this event through the fantastic site of the most talented Keiko and new immediately that I’m participating. The idea comes from Emily over at La Dolce Vita, she introduced the event called In The Pink. The purpose is obviously breast cancer awareness raising (October is worldwide the month of this). The task was to make something pink (food of course, what else..) and blog about it.
And you know, I don’t think I take myself too seriously with this whole blogging thing (well, or do I?) but it was so clear that I want to participate. Because it’s a good cause and because it’s such a big fun to play around with colors in cooking, isn’t it? And if we raise awareness only among ourselves it was worth already. Thank you Emily for hosting this event.
And with pink there are endless possibilities, the hardest thing was to decide which option to go for. I was thinking of a rasperry ilé flotante or maybe a beetroot-goat cheese mousse but then decided something else. I had some beautiful pomegranates left from another dish I made a couple of days ago and I was so ecstatic about their fantastic pink color and extravagant look that I wanted to try something with those. I got some inspiration from a recipe called Pomegranate Parfait (by the way, there are some great recipes on that site) but didn’t finally used that particular recipe (they use gelatine and egg yolks and I wasn’ sure I would get the result I’m looking for) but tried it rather my way.
First I prepared a syrup with sugar and the pomegranate juice but also added some cinnamon and cardamom pods to give it an interesting fragrance. This worked beautifully, great taste, fantastic pink color. Then I mixed the mascarpone and whipped cream together and added the pink syrup. Well, this is where my nice strong pink color got suddenly lost, don’t ask me to where, I have no idea…I was expecting to get a pale pink mousse, instead I had a kind of beige one. Tastes still great -sweet and a little sour and aromatic and you can’t immediately name all ingredients. But since in this case the color was really important I had two choices: either I add some natural coloring, like rasberry syrup but then the original taste is gone or I keep the taste and add a few drops of food coloring which I normally never use. I opted for the latest. All in all, I was very happy with the outcome, although I will work a little bit more on the recipe and try maybe yoghurt instead of the mascarpone which I found a little to heavy for ice cream.
Recipe:
Ingredients (for 500ml ice cream)
1,5 dl pomegranate juice ( I used one and a half fruit)
100g caster sugar
1 cinnamon stick
4 cardamom pods, bruised
200g mascarpone at room temperature
1,5dl double cream, whipped
pomegranate seeds for decoration
First, press the juice of the pomegranates. You can use a citrus press machine which makes life quite easy. Pour the juice with the sugar in a small pan, add the spices, bring to boil and cook for a few minutes. Chill( I put it in a bowl with icecubes in order to be able to work with it that day but you could preapare the syrup the day before). Whisk the mascarpone until smooth and carefully fold in the whipped cream. Now, add the syrup (take out the spices) and mix well. If you want, add a few drops (I used 3) of red food coloring. Churn in the ice cream maker according to manufacturers instructions (it took mine 15 minutes). Serve sprinkled with beautiful pink crystal pomegranate seeds.
Take care all of you!
(Visited 43 times, 1 visits today)